Putin says that the 2018 FIFA World Cup is on track

As each edition of the FIFA World Cup rolls by and each host country goes through the necessary preparations, it seems like the budget that is needed in order to successfully run this kind of event goes higher as more cash is needed. 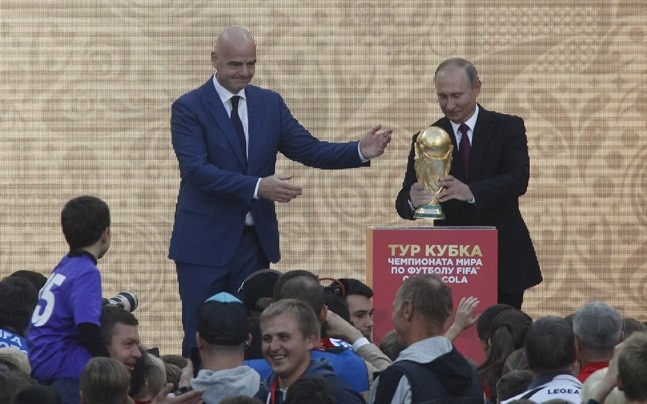 More and better stadiums have to be built to contain the growing list of fans and supporters, newer technology on the actual pitch is being implemented as well as off the pitch.

During the 2014 FIFA World Cup, it’s estimated that the total cost of expenses from the host country, Brazil was in the region of 14$ billion which was more than double of the 2010 edition which had a total cost of around 6$ billion.

Earlier on February it was announced that Russia had increased it’s spending for the 2018 FIFA World Cup by $325 million as it’s total spending had reached $10 billion and the event is still more than 7 months away from even starting.

In spite of this additional cash which is being spent for the approaching event and the delays involving the construction developments of a few stadiums, the Russian president Vladimir Putin says that everything is still going on track for the 2018 FIFA World Cup.

Kolobkov is the Sports Minister of Russia and he also revealed some details concerning the progression and preparations of certain things as Kolobkov said:

"There are some delays at different stages of construction at the stadium in Samara," Kolobkov said, adding that the company building the venue had been fined. A timetable for making up for the delays and a system for the daily monitoring of the venue's completion have been established."